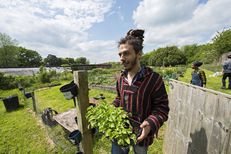 Ulrich set up the Keele Food Co-op during his time at Keele, providing the campus with more than 6 tonnes of organic produce over two years. He has represented the University at two World Student Environmental Network Global Summits, securing the event at Keele in 2016.

Providing leadership and inspiration to other students, Ulrich chose not to fly home to Austria during his entire degree, choosing to spend hours on coaches and trains, and his dissertation on ‘Keele’s International Student Body’s Air Travel Emissions’, has been presented to Keele’s Environmental Manager and International Office.

Ulrich has been part of Think:Green, a student-led service that serves as a platform for students to realise their own ‘green’ projects which led to setting up the ‘Vegetarian & Vegan’ society, organising trips to the local dairy farm, leafletting sessions on campus and improvement of vegan food on the menus.

1 Ideas can be realised: Ulrich’s passion for sustainability spread across his studies and his time as a student and making change involved applying and driving ideas to solve problems and were made a reality.

2 Collaboration drives change: Whether working with other students, senior staff or distinct teams such as catering, Ulrich has worked collaboratively to enable change.

3 Live your passion.: not only has Ulrich contributed significantly to all of the initiatives he has been involved in, he has worked to be a role model for other students by travelling home to Austria by train and coach rather than flying.