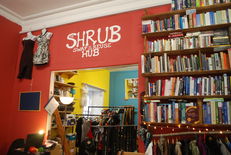 Edinburgh’s Swap and Reuse Hub "SHRUB" Co-operative is the UK's first student-led registered co-operative – a community-based social enterprise addressing issues of sustainability in the local community. We promote Reuse and the Circular Economy as alternatives to a 'take-make-waste' culture.

Beginning in 2008 as a summer project led by University of Edinburgh students, we have become central Edinburgh's Hub for Reuse. In eight years, we have diverted 63 tonnes of stuff from landfill, saved 1,500 tCO2e, run over 1,000 workshops with thousands of students and community participants and saved £35,000+ in disposal costs. The Co-op provides work based placements – learning skills of organising a small business run co-operatively. Participants all report huge co-curricular benefits.

1 Student-led independent projects in the community lead to co-curricular benefits.

3 Never underestimate the passion for students co-operating to create a better world.

1,500 tCO2e savings over the life cycle of the project (Actual over eight years)