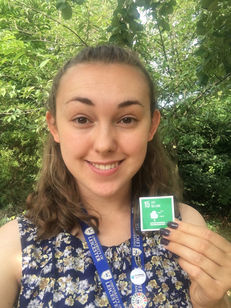 As a passionate Biological Science undergraduate, I knew I wanted my dissertation project to make an impact and maybe even improve biodiversity on campus.

I found out that the University considered maintenance and aesthetic when choosing tree species to plant on campus, but not insects or biodiversity, so designed my research project to identify whether native or introduced tree species was best for insect diversity.

After trying different methods of insect trapping, I obtained 3603 insects to analyse (!) and found that native trees on our campus had higher insect diversity than introduced species as well as identifying certain tree species that insects thrive on in our campus

I was awarded a first and presented my findings to the Biodiversity Working Group, which went on to be included in the University’s Biodiversity Action Plan and has already influenced Gardens policies and practice. All of this inspired me to forge a career in biodiversity research in action.

1. You might get some strange looks when you’re surveying insects, but you get used it!

2. Never under-estimate an undergraduate research project - you can make an impact.

3. Collaboration between different departments allows your research and impact to grow.