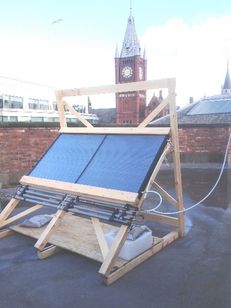 Recognising the power of a Students’ Union to influence the institution, drive forward student needs and support graduate attainment

What advice would you give an institution staff member keen to get this started?

The driving force behind Living Labs at Liverpool comes from both the institution side and their Students’ Union, Liverpool Guild. These learnings come from the Guild’s perspective. Sitting on the institution’s sustainability group helps Green Guild Project Manager, Dave Wheatley, to engage with colleagues to push Living Labs forward and ensure they remain on the University’s agenda.

Dave has incorporated Living Labs into his role by facilitating partnerships between students, the wider community and academics. Within the Guild, student support to setup social enterprises provides some taste of a Living Lab-style learning through problem solving and applied real-world learning. Some fantastic projects have come out of the Guild’s student-led social enterprises, including a group of students developing a solar thermal panel for water purification in disasters. This project also received support through the Low Carbon Eco-Innovatory unit based within the University. The system has recently successfully completed a testing programme with the World Health Organisation. Projects such as this create social, environmental and economic impact in the areas they reach out to, whilst also giving students fantastic employability skills supporting their potential graduate attainment.

Current progress has been mixed and in some areas this has been fairly challenging for the SU as it is not placed at the heart of the academic arena at the University. Some developments are being made on the side by interested post-graduate students or academics who are connecting with community organisations for sustainability projects.

Having a central unit with a cross-institutional approach to progressing and coordinating Living Labs has been identified as a high impact change that would support development of such learning and research partnerships at University of Liverpool.

It is believed that a cross-institutional approach would encourage buy-in from a greater range of stakeholders and raise Living Labs up the University’s agenda and priorities. As well as a central coordinating role within the institution, it was also suggested that creation of an online platform to promote opportunities and provide a hub for Living Lab engagement would be a useful resource for the University.