More than 80% of students, surveyed in a new report, believe that sustainable development should be actively promoted and incorporated by UK universities, a belief which increases as they progress through their studies.

This is one of the major findings of Student attitudes towards and skills for sustainable development by the National Union of Students (NUS) and Higher Education Academy (HEA). It is the third consecutive year in which the survey has been run, as part of a longitudinal study into student attitudes towards sustainable development in UK higher education.

Launching on the same day as the landmark Intergovernmental Panel on Climate Change (IPCC) report finding a 95% certainty of humans’ being the ‘dominant cause’ of global warming, this report is a valuable demonstration of students’ commitment to finding solutions to our environmental problems.

Findings of the research chime with the conclusions of the two previous reports (responded to during academic years 2010-11 and 2011-12). Over two thirds of the surveyed students feel that sustainable development is something which should be included in their university courses - a belief consistently reported since the first survey taken in 2010-11.

The survey, of nearly 7,000 first- and third-year students in total, also uncovered new insights, such as a desire for teaching to include extra-curricular sustainable development learning opportunities. First-year respondents to the 2012 survey are more likely to believe that their institution is promoting sustainable development skills, than in previous years.

First-year undergraduate students starting their university careers in 2012 were more likely to accept reduced starting salaries for a job in a company with a good track record on sustainability, than first-years questioned previously. Similarly third-years responding in 2012, reported feeling more likely to do the same than when responding as first- or second-years.

NUS vice president of society and citizenship Dom Anderson says, “This report demonstrates the clear demand for sustainable development among students in the UK, which is one of the core reasons that NUS does so much greening work. Turning students’ unions into hubs of sustainability at the hearts of wider communities isn’t just good for the environment, but also helps students’ education to develop in a more holistic way – and the results of this survey show that students recognise this too. We already see that sustainability is becoming more and more important to employers, and now this report shows that it’s just as important to students too. It’s crucial that we build on this research by supporting universities and colleges to develop greener curriculums.”

Iain Patton, EAUC CEO adds, "With the data used in this third report being some four times the size of the previous data set, it is profoundly encouraging to see that with the seismic changes of rising fees and competition, sustainability has not dropped off students' radar. In fact there is evidence of consolidation and even some increase in student expectations."

The research strengthens the conclusion of the two previous reports (available on the HEA website), showing that interest in sustainable development remains strong among students throughout their university careers and with the introduction of increased tuition fees. There will be a fourth phase of the survey undertaken during 2013-14, targeting first- and second-year students. 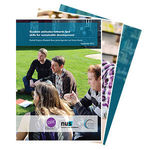