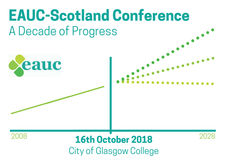 Since 2008 Scotland has reached 2020 carbon reduction targets 6 years early, became one of the first nations to sign up to United Nations Sustainable Development Goals, and reached the stage where we can generate more than two-thirds of our electricity from renewable sources. Universities and colleges have been thriving in this landscape of sustainability progress over the past ten years.

Before the conference we asked the sector to vote for the sustainability projects that most inspired them over the last 10 years under 6 categories. Judging was undertaken to select a few of these projects to be showcased on the day. The projects highlighted are below:

The University of Aberdeens' PassivHaus Nursery project was selected as the Decade Highlight for Campus Development & Utilities . The presentation given on the day is available to download from the right of this page.

In replacing its outdated childcare facility, the University of Aberdeen chose to stretch the institutional commitment to energy efficient construction. The result was the first fully certified PassivHaus Nursery in Scotland and the first such building at a Scottish University. It was also designed to reflect best practice in early-years care and provides an exemplary venue for the youngest members of the University community. The project itself helped build capacity in the local construction sector, with the majority of contractors involved in their first PassivHaus project and became a focal point in the region for discussing low energy design.

BMJ were the design team architects for the project.

There was a high level of public engagement regarding project. The building won the City of Aberdeen Awards and a Green Gown Award in 2016 for Built Environment.

EAUC-Scotland held their fifth conference on the 16th October 2018 at the City of Glasgow College. Find all resources from the Conference using the tag EAUCS2018, and find out more about the event on the Conference webpages.