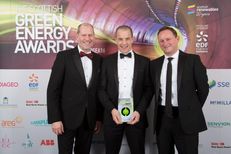 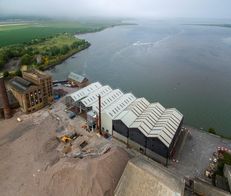 The £25 million Biomass Energy Centre & District Heating Network for the University of St Andrews has been celebrated at one of Scotland’s most prestigious awards ceremonies, winning the Sustainable Development category of the Scottish Green Energy Awards.

The project saw Vital Energi work in partnership with the University to realise their  vision for a campus-wide low carbon energy system by refurbishing an Old paper mill building, transforming it into a state of the art Biomass based energy centre that will, in future, form the heart of a planned new technology focused business park.

The new energy system feeds remote University Buildings more than 6km away through a highly thermally efficient 23km underground district heating network. The project will bring significant environmental benefits which will see carbon emissions reduced by over 6,000 tonnes per year.

Mike Cooke explained, “We have worked closely with the University on this project since September 2014 and experienced first-hand their commitment to the environment and their enthusiasm to be involved at every step of the way.  We’re delighted the project has been recognised at this prestigious event and we would like to acknowledge the patience and support of the local residents and project stakeholders who experienced disruption while the heat network was formed.”

In addition to the building, mechanical and engineering works, Vital Energi took part in the Guardbridge Guarantee, helping the University to ensure that the project also delivered tangible benefit to Scotland and the local community.   Vital Energi worked closely with all stakeholders including local residents and businesses to maximise local spending (73%) and local employment.

433 local people have benefitted from employment associated with the implementation and continued operation of the scheme over the next 5 years, 79% of those are employed live within Fife and Central Scotland.

Professor Verity Brown, Vice Principal (Enterprise & Engagement), said: “To win such a prestigious award against competition from across Scotland is an outstanding achievement.  The energy centre at the Eden Campus at Guardbridge is a remarkable engineering project which would not have been possible without our partners, Vital Energi.

“It is a project that would not have been possible without the forbearance and support of local people in and around Guardbridge.”