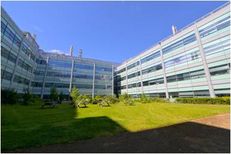 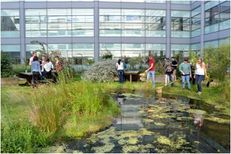 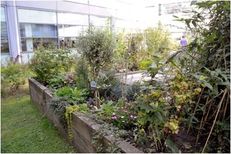 The quad at the centre of the Michael Smith Building has been established as a biodiversity garden, including a large pond, raised flower beds, wild flower mixtures and areas of hay meadow in the lawns. The site as a whole is managed to promote plant and animal biodiversity. Insects such as pond skaters and dragon flies live in and around the pond, which is also home to a healthy community of frogs.

As the biodiversity garden has become established, it has grown to be an important part of the life of the building. Raised flower beds are maintained by teams of staff and postgraduate students, with an annual competition for the best displays. In the Summer, many more people use the quad for coffee and lunch breaks than is seen in comparable quads in other buildings. It is also used for various social events such as an annual Life Science festival.

In a recent staff survey, 90% of respondents stated that they appreciated the use of the quad as a biodiversity garden.

The quad has also made a positive contribution to teaching and research. Students all take part in regular “bioblitzes”, giving them training in identification and contributing to a data bank, examining how the quad natural community is developing over time. Recently, a sustainability summer student carried out a detailed analysis of the soils within the quad. She was able to show that the carbon stored in the soil in the quad is equivalent to 60 return flights from Manchester to Paris.