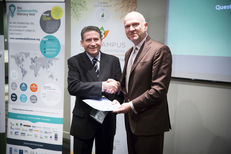 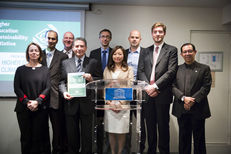 The collective voice of the world’s universities, colleges and students must be heard at COP21 when the United Nations Climate Change Conference takes place in Paris, France, during the first week of December.

On Wednesday 14 October, COP21 Secretary General, Pierre-Henri Guignard, was handed an Open Letter at UNESCO Headquarters in Paris, conveying this call on behalf of a global alliance of networks and associations representing more than 6,000 universities and colleges worldwide.

The Open Letter was presented by representatives of the global alliance, including the EAUC, HESI and the GRLI, and had been signed by major tertiary and higher education sustainability and student networks and associations on every continent.

In the letter to COP21 Ministers and negotiators, governments are urged to acknowledge and strengthen the research and education role that universities and colleges play in finding and implementing solutions towards climate change mitigation and adaptation, placing it in the context of addressing wider issues of sustainability, including social and economic policies and practices.

The letter also proposes more specific measures to be implemented, such as showcasing universities and colleges as living laboratories for climate change adaptation and mitigation, increasing support for transdisciplinary learning, teaching and research approaches and using university and college campuses and operations as a leverage agent to accelerate the transition to clean energy sources.

The event in Paris was hosted by The Higher Education Sustainability Initiative - HESI - which was created by a consortium of UN entities UNESCO, UN-DESA, UNEP, Global Compact and UNU in 2012.

Iain Patton, CEO of the UK based Environmental Association for Universities and Colleges, said:

"Never before have students, colleges and universities across every continent spoken with one powerful voice to urge national and international governments to take action. Education has the creative solving power to be the unique catalyst to help society better understand our changing climate and to lead on solutions. Over 6,000 universities and colleges globally are demanding that Ministers at COP21 recognise this power and provide the policy, reporting and funding changes from our Governments to fully unleash the power of our staff and students. We hope that for the sake of all our futures the Ministers will help us to do more.”