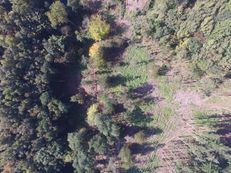 Keele University has 60 ha of woodlands, mostly planted in the 19th century, including large commercial plantations. For the past 50 years Keele University has managed all this woodland as an educational and recreational resource while aiming to maximise biodiversity. Recently, a new opportunity has opened up. As with many woodlands in the area, the disease Phytophthora was found in the woodland. Following the removal of 1600 larch trees and many hectares of rhododendron, large areas are now open for replanting. The University is taking the opportunity to return what was largely plantation back to more natural woodland typical of the clay soils. This involves extensive planting of native trees allowing the spread of native plants and animals from the adjoining older woodland. Biodiversity records going back to the beginning of the University provide a baseline for monitoring changes in biodiversity of these areas allowing management to be adjusted to further foster biodiversity.

The whole of the campus has been designated as an arboretum. This is partly to highlight the historically significant non-native trees planted along the western woodland margin, some of which were amongst the first introductions into the UK, as well as the more significant specimen native trees in the woodland. But it also extends across all of the built part of the campus, equal in size to the woodland. Here the trees are planted in amongst the buildings. At the main focal points of the campus these trees are designed to soften the built environment to enhance the working environment of staff and students. Trees with wildlife benefits, such as those that provide food for birds and insects, are included in these areas, so that biodiversity also benefits. In other areas of the campus, there are concentrations of educationally useful trees, building sets of ‘teaching specimens’. As well as fulfilling the needs of education, the tree collection include rare species and cultivars. As a case study, we hold a National Collection of more than 240 species and cultivars of ornamental flowering cherries. This is based upon a historic collection of cherries across the campus, so there is a mix of old and young specimens. The collection includes a number of type species (mostly with single flowers and so useful for insects) and many ornamental cultivars, primarily from Japan but including examples from around the world. Many of these cultivars are of historical value, others have largely disappeared from cultivation, and some are almost unknown outside of Japan so the collection acts as a store of genetic diversity.

Keele University is striving to conserve biodiversity in its woodlands and collection of trees through the maintenance and increase of whole organisms, primarily native plants and animals, and the conservation of genetic diversity.