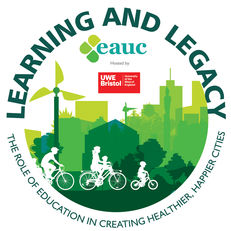 This keynote session is from the “Learning and Legacy: The Role of Education in Creating Healthier and Happier Cities” EAUC Annual Conference 2016.

Bristol was European Green capital 2015, the first UK city to achieve this accolade. The two city universities were important contributors to the winning bid for the Green Capital and have been central to the success of the 2015 year through student and staff engagement across many domains of study.

This session took the example of the two Bristol universities and explored their role in the city transformation process created by the European Green Capital designation and their ongoing role as Initial Founding Partners of the Bristol Green Capital Partnership CIC.

Four distinct contributions by the HEIs are highlighted as agents of change:

The session reflected upon the conditions for success and the transferability of university engagement to other cities. Was Bristol unique because of Green Capital 2015 or is it replicable to other cities?

To find more presentations and resources from this Conference, search for EAUCConf16.